While the history of karaoke is still somewhat obscure, most people believe it was founded about 40 years ago in the city of Kobe, one of the three largest cities in Japan.  Others believe it started long before in the 1950's and 60's with American TV, following a bouncing ball across the TV screen.  In a since you could say it was simply a "sing-a-long".

When Japan introduced it as "kara-oke" its name was born.  One story claims a snack bar in Kobe asked if people wanted to sing because their entertainer didn't show up.

Karaoke was only in Japan for the first 20 years but has now spread throughout the world making "Karaoke" an international entertainment. 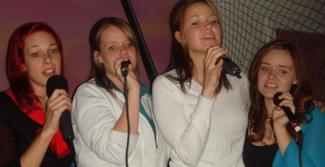 When looking for great entertainment for your next party?  Why hire "just" a DJ? add the flavor of a Karaoke DJ and see how it spices up any party or gathering.  Lyrics are on the screen,  you become the singer.

Multiple microphones allow for the "shy ones" to sing karaoke with their friends. Multiple TVs allow for audience participation.

Lighting at no extra cost to you!
Excellent library of children's & teens karaoke. New releases of the hottest hits on the radio, best of the old karaoke standards, Country karaoke titles and Broadway karaoke titles! New titles purchased monthly for an up-to-date library.
The newest in digital karaoke entertainment.  Karaoke Cat has made her own "digitally mastered" state of the art sound system.   Making you sound like a rock star!

Karaoke Cat Entertainment bringing joy to the party with over 20 years experience.

~MIC PROTECTION ON EVERY MIC

CHANGED AND REPLACED AFTER EVERY SINGER~

Karaoke Fact Sheet:
The word itself comes from putting together two Japanese words. "Kara", meaning empty and "oke" short for orchestra.  So the word Karaoke really means "empty orchestra".
Karaoke tracks, provide only the music, the vocals are then provided by the person holding the microphone.
This person sings the words to the song by reading the words displayed on the screen.

​Singing "We Don't Need Another Hero" with Karaoke Cat